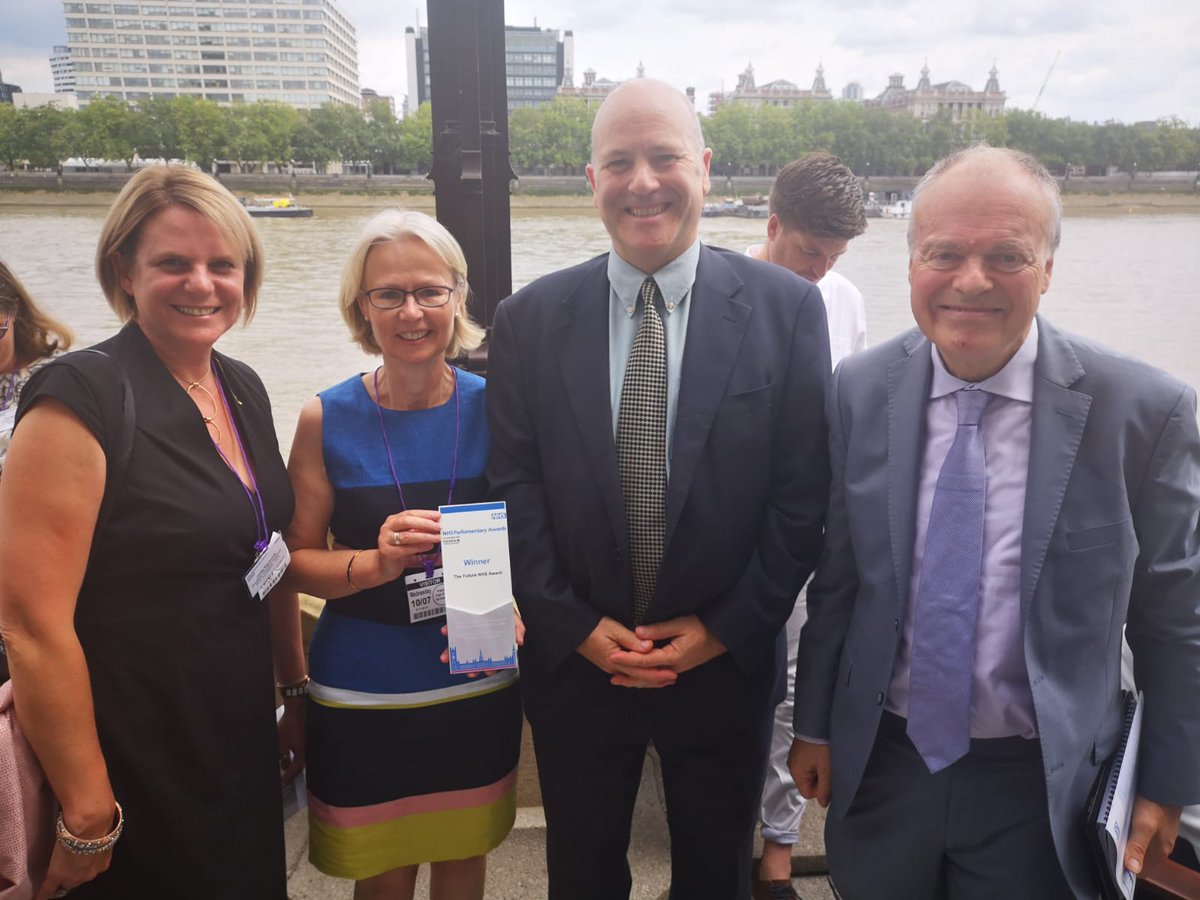 Sheffield Teaching Hospitals NHS Foundation Trust has been named the national winner of the NHS Future Award at the NHS Parliamentary Awards at the House of Commons on Wednesday 10 July.

The award was given to the team of specialists who have pioneered the use of a breakthrough treatment in the UK which is the first to significantly reverse disability in certain patients with multiple sclerosis (MS). The treatment called autologous haematopoietic stem cell transplantation (AHSCT) was featured in a BBC Panorama programme.

The autologous haematopoietic stem cell transplant (AHSCT) team led by Professor Basil Sharrack, consultant neurologist and Professor John Snowden, consultant haematologist was nominated by Clive Betts MP and was selected from 750 nominations submitted by over 230 MPs across the country.

The awards recognise those individuals or teams thought to have made the biggest improvements to health and care services.

The global impact of this treatment on patients with severe inflammatory MS has been confirmed by the published findings of the first randomised controlled trial in this field, the MIST trial, which showed that AHSCT stabilised the disease and reduced the level of disability to levels never previously seen before in research trials investigating new and emerging treatments for MS. Sheffield Teaching Hospitals NHS Foundation Trust was the sole UK site involved in the trial.

AHSCT aims to stop the damage caused by MS to the brain and spinal cord by ‘wiping out’ the faulty immune system causing the illness with a high dose of chemotherapy. Once destroyed, the immune system is then rebuilt using blood and bone marrow stem cells which would have been collected from the patient’s own blood prior to chemotherapy. The regenerating immune system is then effectively ‘rebooted’. It is this mechanism that allows the inflammation in the brain and spinal cord that causes problems with vision, mobility, sensation, balance, bladder, cognition, fatigue and pain, to subside and heal.

So far the treatment has had a life-changing impact on patients who have the relapsing remitting form of the disease, and many regaining their ability to walk, run and even dance as a result.

Colette Beecher, 50, from Wickersley, Rotherham, was diagnosed with MS in January 2011, and has been relapse free for three years after having the MS stem cell transplantation at Sheffield's Royal Hallamshire Hospital in April 2016.

“Several of my symptoms have now disappeared – I no longer get spasms that go down my spine when I flex my head forward, and my right leg hasn't given way for three years.”

A recent MRI scan showed she had no signs of the active disease and clinically she has had no further elapses since receiving this treatment. “I now have the possibility of living a life without MS and contemplating a future without disability. This is a future that this treatment has given me. I’d like to thank Professor Sharrack and Professor Snowden and the team for seeking ways to treat this condition so that people like me can live a life not defined by MS and disability but with possibilities, freedom and optimism.”

Three years ago Louise Willetts’s MS had become extremely severe. She was in a wheelchair and had given up on her family and career ambitions. Since having the AHSCT treatment at Sheffield Teaching Hospitals Louise has since gone on to have a healthy baby daughter called Joy.

She said: “The team’s work has made such a difference to all areas of my life. It has allowed me to fulfil my dreams including having had a baby, which I thought I wouldn’t be able to do again. I am now using my experiences of MS to train as a counsellor to support other people who have been diagnosed. I would like to say a huge thank you to both Professors and their teams for making all of this possible.”

Kirsten Major, Chief Executive for Sheffield Teaching Hospitals NHS Foundation, said: "We are thrilled that the team have won this highly coveted national award. We have a proud tradition of pioneering the latest innovations and advances in medical treatments in partnership with our University, health and industry colleagues. The AHSCT team, led by Professor Sharrack and Professor Snowden, have played a leading role nationally and globally in developing this treatment which has the potential to benefit many thousands of MS sufferers around the world. We are incredibly proud of everyone who has contributed to the development and delivery of this exciting new treatment.”

Professor Dame Pamela Shaw, Vice President and Head of the Faculty of Medicine and Dentistry, University of Sheffield said: “We are delighted that the team led by the University of Sheffield’s Honorary Professor of Clinical Neurology, Basil Sharrack and Honorary Professor of Haemato-oncology and Stem Cell Transplantation, John Snowden has been recognised at the NHS Parliamentary Awards. This pioneering research has the potential to have a huge impact for people living with multiple sclerosis; the national Future NHS Award is an amazing recognition of the important work that the team does.

“The University of Sheffield has a long legacy of working closely on research projects with clinical teams at Sheffield Teaching Hospitals NHS Foundation Trust through our NIHR Sheffield Biomedical Research Centre and Clinical Research Facility. The collaboration this fosters is crucial to the advancement of new treatments and services, and helps to maintain Sheffield’s reputation as being at the forefront of clinical breakthroughs, exemplified by this work which will make such a difference for people with multiple sclerosis.”

Clive Betts MP for Sheffield South said: “I am absolutely delighted that the award has gone to such deserving recipients. They epitomise the care and compassion in the NHS, combined with clinical and medical excellence at the very top of their profession.”

Ongoing research into AHSCT at Sheffield Teaching Hospitals is also being supported by Sheffield Hospitals Charity with a special fundraising appeal.

Anyone that would like to support the appeal can find out more at https://www.sheffieldhospitalscharity.org.uk/research

The NHS Parliamentary Awards were launched in March this year and recognise the contribution made by individuals who work in and alongside the NHS. MPs were called upon to find and nominate those individuals or teams they thought have made the biggest improvements to health and care services in their constituencies across ten categories.

Yoshi Nakamura, Managing Director, FUJIFILM and Lord Prior of Brampton, Chair, NHS England presented the team with their award.