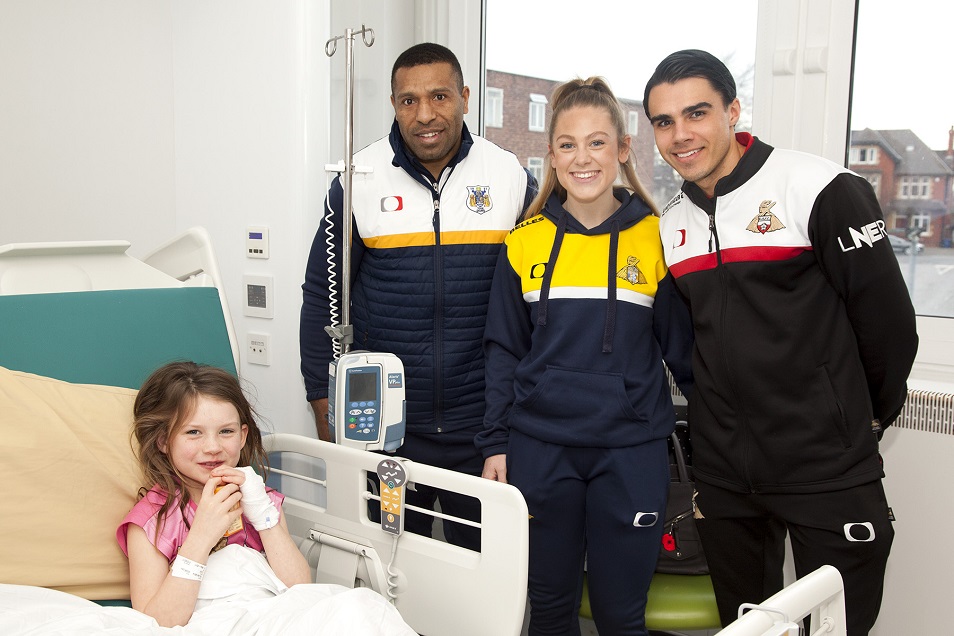 Children staying on the ward got the chance to meet their sporting heroes to make up for missing out on celebrations and festivities over the Christmas period.

Rovers Captain Ben Whiteman and players Donervon Daniels and Reece James were met enthusiastically by patients, families and staff members alike. They were joined by Belles players Tori Thomas and Emily Burgin, along with Jason Tali and Kieron Lawton from the Dons.

Ben Whiteman said: “It’s a special time of year with Christmas approaching, it’s always nice to go out and see Doncaster people of all different backgrounds who are going through illnesses or having operations and it’s nice to cheer them up for a bit. Thank you to the staff on the ward for the amazing work they do and for making this visit possible.”

Every year Club Doncaster staff, players and Club Doncaster Foundation make a donation which the Trust uses to enhance the lives of the children on the ward in the hospital school.

Claire Riley, Hospital School Teacher at Doncaster and Bassetlaw Hospitals, said: “Every year these visits from the team elate and inspire kids who are spending time in hospital over Christmas. Children don’t want to be in hospital at any time of year and staying over can be particularly upsetting around this time of year when they feel left out of Christmas activities. Meeting their heroes is a unique opportunity which gives them something to share with their friends and family when they get home. It also inspires our children to get involved in football and other sports when they leave hospital.

“On behalf of the Trust I would like to thank Doncaster Rovers and everyone over at Club Doncaster Foundation for taking time out of their busy schedules to visit the children every year.”