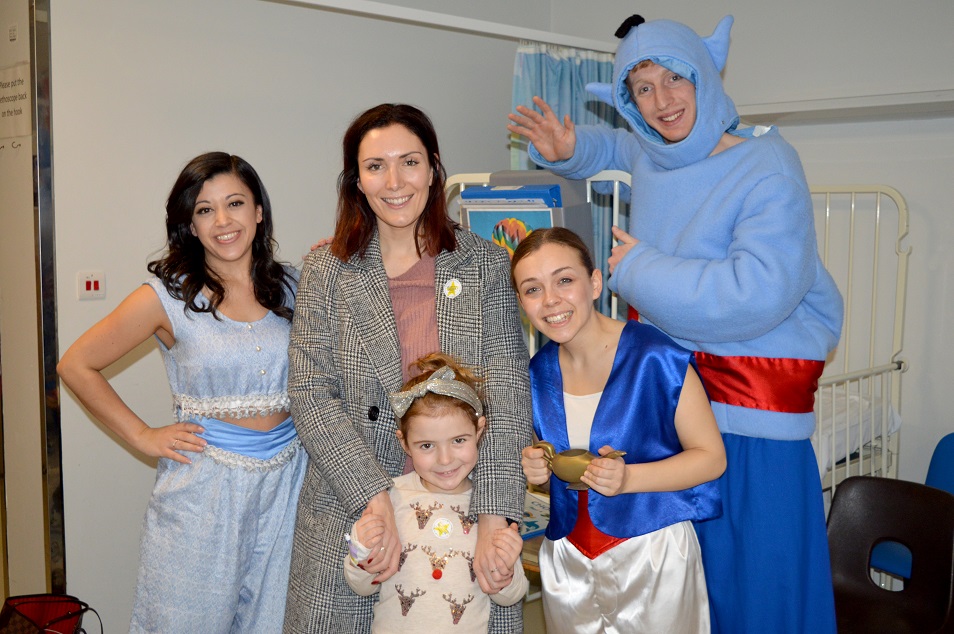 The travelling cast brought their production of Aladdin, the magical tale of the rags-to-riches prince and his wish-granting genie, to the Children’s Ward for young patients, their families and the staff.

The pantomime gave children and their carers the chance to escape the routine and reality of being in hospital as they got the chance to meet the Genie, Princess Jasmine and Aladdin himself.

There are expected to be more than 200,000 children spending the Christmas period in hospital this year. Starlight provide services to help families in hospital or affected by serious illness to create magical moments and memories throughout the entire year, but it’s especially important at this busy and festive time of year.

Each year, Starlight send touring pantomimes at Christmas and Storytellers during Spring to hospitals and hospices across the UK. The troupe of actors do up to two shows a day, six days a week for three months. They go fully prepared with colourful scenery, props and costumes to provide an immersive theatre experience. After the performance, the cast can also go around the ward round to meet children who couldn’t make the show.

Maxine Deakin, Play Leader at Doncaster and Bassetlaw Teaching Hospitals, said: “On behalf of everyone on the children’s ward, I’d like to thank the Starlight charity and their wonderful cast for visiting the children. Being in hospital can be an upsetting time for children, especially during the Christmas period when they can feel like they are missing out on festivities. Having something to take them away from a clinical setting really does a lot to boost their spirits. It gives them something to look forward to and something to tell their friends and family about when they return home.”

Starlight aim to preserve childhood throughout serious illness, via a unique combination of services which range from hospital services, events and wish granting. To help support Starlight you can text 5STAR to 70085 to donate £5.

Photo shows: Gemma Meek with daughter Darcie and the cast of Aladdin