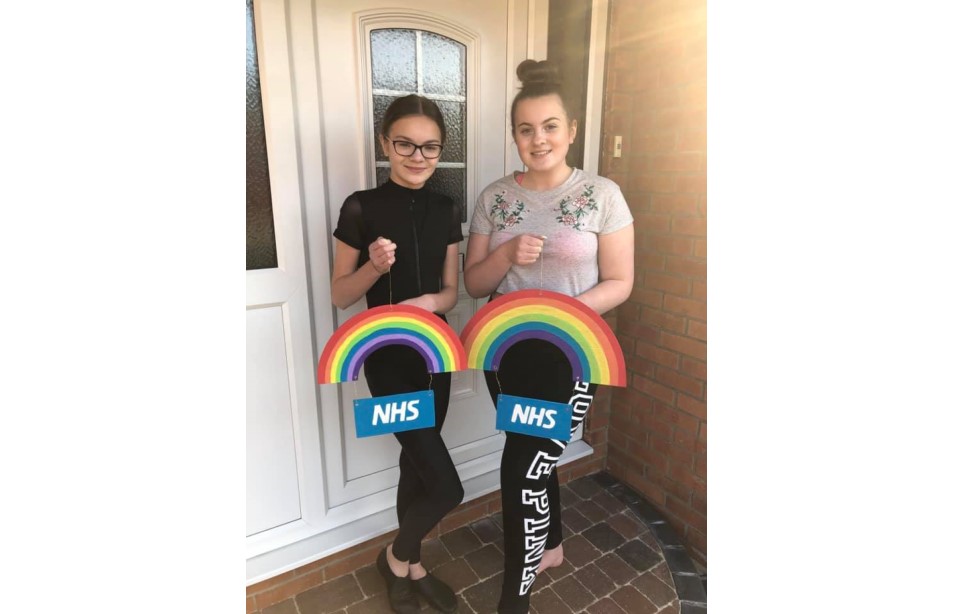 The daughters of an occupational therapist at Doncaster and Bassetlaw Teaching Hospital (DBTH) have been getting creative in lockdown, by making use of their woodwork skills to create model rainbows for hospital staff.

Isabelle and Olivia Ward, aged twelve and 15 respectively, began this project on Thursday 16 April and have since produced over 160 of the rainbows, with dozens of orders still coming in. The idea originally came from their father Steve, who suggested that the girls put together a couple of the keepsakes to surprise their mother, Deborah, when she returned home from a busy shift at Doncaster Royal Infirmary (DRI).

Speaking about this, Deborah said: ‘’I was over the moon when I saw what Isabelle and Olivia had done for me. When they were little, they loved getting involved in craft projects and would always go the extra mile to make sure that theirs was something special, to the point where Olivia earned the title of ‘’little miss homework’’ at her primary school. But even knowing how talented they are, I was still incredibly moved by their thoughtful gift’’.

To show how touched she was by the memento, Deborah uploaded a picture onto her Facebook page, whereupon she was inundated with requests from Trust colleagues who wanted rainbows of their very own.

Deborah continued: ‘’It just snowballed from there, the response was amazing and everybody was so impressed with their artwork. That’s when the girls decided to start taking orders, of which they’ve had over 250 so far! In fact, it actually became quite hard for them to keep up with the demand and at one point we ran out of both paint and wood supplies! Fortunately, colleagues at the Trust, alongside our friends and family, all pitched in to donate more of the materials so that we could keep going. In particular, I would like to thank Belinda Lloyd who has been helping us to make deliveries across all hospital sites.’’

Keen to channel the interest into a good cause, a Just Giving page was set up for The Ward’s Woodwork Rainbows, with all the proceeds going towards the DBTH charity. At the time of writing, £725 have been raised, surpassing the initial target of £200.

Expressing gratitude to the Ward family, Richard Parker, Chief Executive at DBTH, said: ‘’On behalf of myself and the Trust, I would like to say a big thank you to Isabelle and Olivia. It’s been extremely heart-warming to see everyone getting behind this kind gesture and supporting their local hospitals. It has clearly struck a chord with everybody during this difficult time and puts a smile on the face of anyone who receives a rainbow. We really appreciate everything they’re doing.’’

The Trust would also like to thank Sainsbury’s in Edenthorpe, who have generously provided the plastic bags and tissue paper that is used for delivering the rainbows, as well as B&Q who donated extra wood supplies.