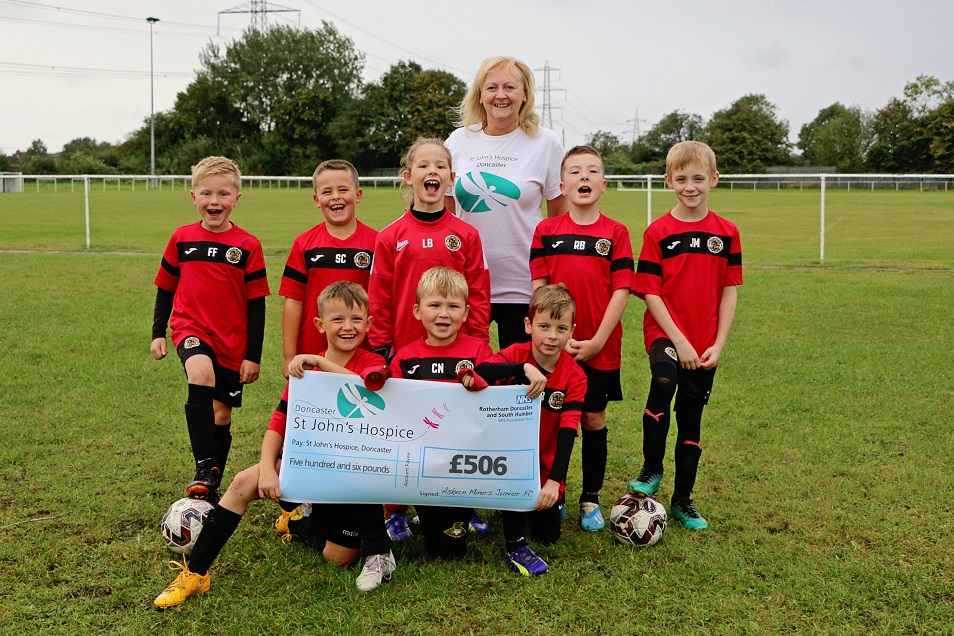 St John’s Hospice in Balby, Doncaster has netted a £506 boost thanks to Askern Miners Junior Football Club under 8s and 15 other local clubs.

Jaimi North, founder of the club decided to hold a memorial tournament to raise funds for the hospice in memory of one of his player’s grandparent’s and long standing fan Pauline Humble.

Jaimi said: “Pauline was the clubs original fan, she rang me for information before I’d even properly set the club up and once we began playing games she attended whenever her health was good enough, cheering on her grandson Joshua and the rest of the team.

“Pauline spent two weeks in the hospice and I saw first-hand how their adopt a teddy scheme helped Joshua. After Pauline passed away, Joshua wanted to raise some money for the hospice so they could buy more teddies to help kids who are going through a tough time like he did. That’s when I decided to host a memorial tournament in Pauline’s name.”

Sixteen teams from across Doncaster came together for the full day tournament, kick starting it off with a minute of applause to honour Pauline. After a hard days slog, Sprotbrough won the under 8s tournament, but Askern Miners under 7 reds won the under 7s tournament, so they get to keep a ‘Pauline Humble’ trophy in their cabinet!

Lindsey Richards of the hospice said: “Thank you so much to Pauline’s family and to Jaimi for organising the event. The money will benefit our patients and their families so much. Well done to everyone involved, you all did amazingly well!”

To know more about supporting your local hospice by becoming a sponsor or to fundraise by holding an event, please contact the fundraising team on 01302 796662 or 01302 798391. Alternatively you can donate here: