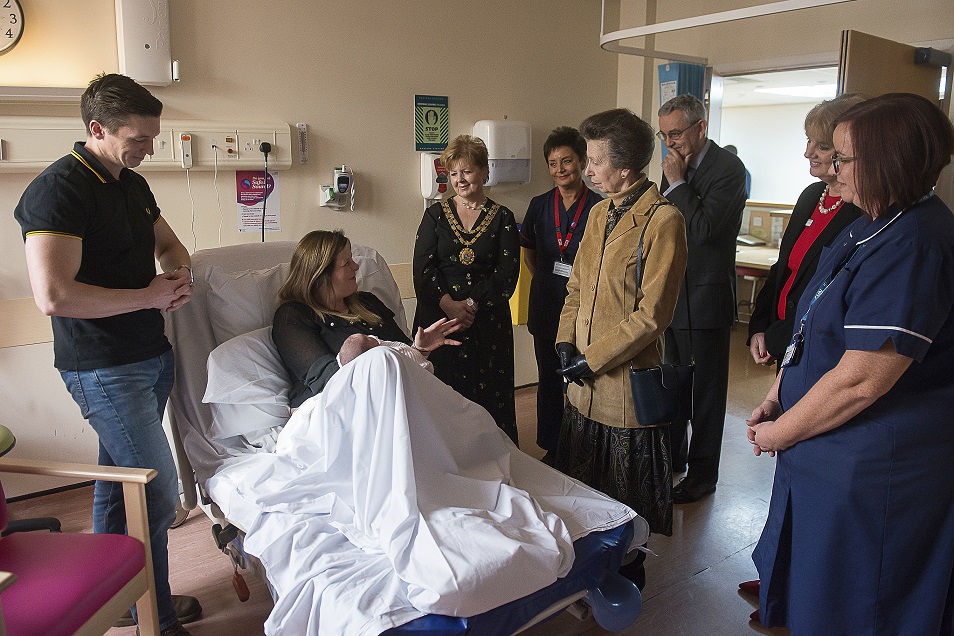 On February 5th, Her Royal Highness The Princess Royal, Patron of The Royal College of Midwives (RCM), paid a visit to the maternity unit at The Rotherham NHS Foundation Trust and later to Sheffield Teaching Hospitals NHS Foundation Trust’ Spinal Injuries Centre.

The visit to Sheffield Teaching Hospitals was to coincide with the 25th anniversary of the opening of the Centre. As the first patron of the Spinal Injuries Association, The Princess Royal officially opened the Centre 25 years ago.

The Princess Royal was accompanied on her visit to Rotherham by June Lovett, the Associate Chief Nurse and Head of Midwifery, Angela Wood, Chief Nurse, as well as RCM Chief Executive Gill Walton and RCM President Kathryn Gutteridge.

June said. “Her Royal Highness was really interested in our services and in our maternity care and in our development in the involvement of our patients. She was very engaging and appreciative of the work that goes on here and we were all absolutely delighted to welcome her."

Tony Pedder, Chairman of Sheffield Teaching Hospitals NHS Foundation Trust, said: "We were delighted to welcome The Princess Royal back to the Centre Her Royal Highness opened 25 years ago. The Princess Royal has a long association with our Centre as well as being Patron of the Spinal Injuries Association. We were very proud to show Her Royal Highness some of the wonderful new facilities we have created here and the way treatments and rehabilitation have developed over the years to ensure we remain at the cutting edge of spinal injury care.”

Rotherham’s maternity unit is shortlisted for two RCM awards this year; in the RCM's Annual Awards for the Midwifery Service of the Year and also, Midwife Emma Carver, for the RCM's Midwives' Midwife of the Year.